A 39,000-year-old female woolly mammoth was found frozen in Ann Arbor at the junction of Scio Church and Zeeb Roads, on the campus of Emerson School. Discovered on a school snow day in January, scientists have determined this to be the best-preserved specimen of a woolly mammoth ever found. 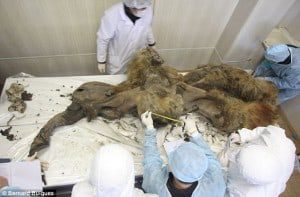 The mammoth, pictured, was discovered by Emerson science teacher Michael Wilson in an ice tomb on the Emerson School playground. The entire carcass is especially well preserved, as can be seen, because it remained entirely frozen for thousands of years. It will be on display for tourists and visitors for several months at Emerson School, prior to its conveyance to a University of Michigan science museum.

Even clumps of the animal’s distinguishing hair are remarkably intact. Experts who found the female mammoth also discovered a sample of its blood inside ice beneath the carcass, which scientists claim may be used to clone one of the animals.

Mr. Wilson and his Emerson science colleagues are excited by the prospect of regrowing the extinct creature. However, a groundswell of opposition is coming from Emerson’s own building and grounds crew, who feel that this enormous, Frankenstein-monster-like animal would wreak havoc on the grass they lovingly maintain for students.

Assistant Head of School Peggy Wilson, author of this clever and completely fabricated story, hopes you enjoyed a laugh on April Fools Day.

I believe I’ve drawn on my education at Emerson throughout middle school, high school, college, graduate school and beyond.

Enriched child care is offered before and after school, five days a week.
X