The Emerson Middle School soccer team closed out the regular season against arch-rival Steiner school Thursday evening, and the game was fast paced and exciting, as is the norm when these teams meet. While the Eagles tended to carry the bulk of the possession, goals were hard to come by, due to the strong play of the Stars goalkeeper. Meanwhile, Steiner put more pressure on Emerson than in their first meeting of the season, coming close a few times on fast rushes. The Eagles’ back four of Isabelle Crumm, Cammie Treiber, Greta Downey and Biruk Tewodros did a fine job of making life difficult for the attackers, and keeper Michael Pelosi did great work coming out and challenging. Moving into the latter stages of the first half, a Star was caught pulling on the jersey of an Eagle forward, resulting in a free kick from 25 yards out, which Thomas Halloran tucked just under the crossbar for the lone goal before intermission.

After pressuring Emerson in the first half, in large part by moving two of their stronger players forward from their normal back position, Steiner somewhat surprisingly pulled those two further back in the second period. Though there was still action for Michael, it didn’t seem as intense as earlier in the game. At the same time, Emerson, after narrowly missing on many chances in the first half, found the net two more times in the second, despite a number of fine saves by the Stars’ keeper. Mara Mueting sent a wonderful from her right midfield position to Henry Branch in front of the net, and Henry finished it nicely, giving the Eagles a bit of breathing room. Vincent Pelosi also scored when, on a bobbled ball by the Stars keeper, Vincent was in the right place in the resulting scramble, and Emerson came away with a 3-0 victory.

Editor’s note: Coach Lenny promised his players he would wear a suit if they won their final game, and true to his word he came dressed to impress at school on Friday (see below). 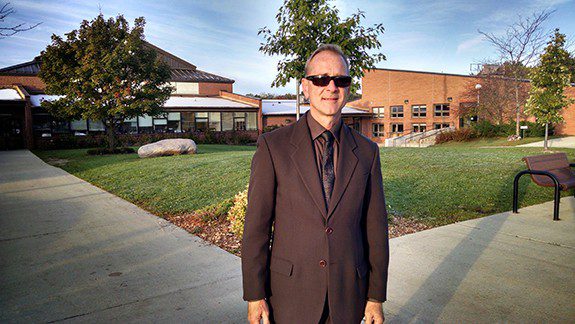 I am a rising sophomore at Dartmouth College, and forever grateful for my Emerson education.