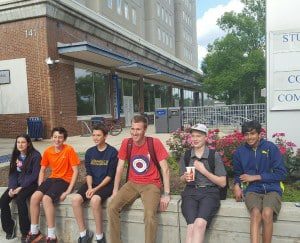 In just the second year of competing in National Academic Quiz Tournament’s (NAQT) Quiz Bowl competitions, a team of Emerson students finished tied for 33rd in the nation. Proud Quiz Bowl coach Bryan Seymour helped sum up the magnitude of this achievement:

Quiz Bowl has been compared to team Jeopardy for students. Two teams compete head-to-head, racing to buzz in first and correctly answer questions from all areas of knowledge, including history, literature, science, fine arts, current events, sports, and popular culture.

At Emerson, it feels like everyone is there to help you. The teachers, the kids, and even the janitors.