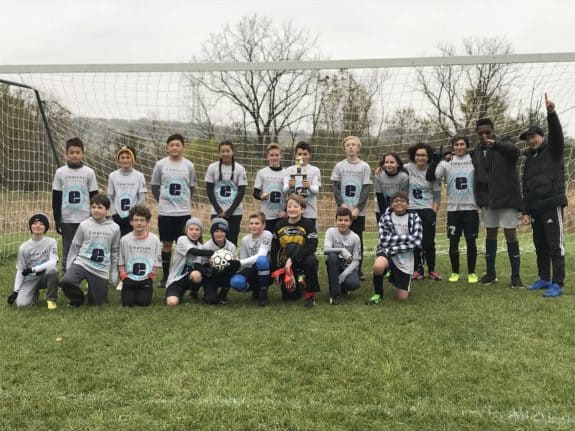 The Emerson Eagle middle school soccer team wrapped up another successful season, ending the regular season at the top of the league table, and then playing dominantly in the tournament from the opening kick-off to the final whistle.

Michael Needham scored barely a minute into the first game against Steiner School, and the Eagles never looked back. With captain Lance Caswell on the bench, recovering from an injury earlier in the week, and the dangerous Vince Vartanian also resting in anticipation of a stern test in the following morning’s season ending game, Emerson put together a rock-solid performance, suffocating the Storm offense, maintaining possession, and creating many scoring chances. Converting enough of those chances to lead comfortably 4-0 late in the game, the Eagles did give up a goal in the last few minutes, but the outcome was never in doubt, and the team was able to ride the momentum of their 4-1 victory into the championship game the next morning.

Saturday was chilly and damp, but the rain held off. Under the weather, however, was Loui Gabaron, Emerson’s swift left mid, and the Eagles were also without the services of forward Neel Moudgal and outside back Michelle Mobius. Still, things looked promising with the return of Lance and Vince. Emerson faced another team of ‘Eagles’, from Ann Arbor Christian School, who had earned their way to the championship game by virtue of an upset of Spiritus Sanctus Plymouth the previous evening, 2-1, in a shootout.

Emerson jumped out ahead with another early goal, and, if anything, were even more control throughout the game than on the previous evening. Vince Vartanian’s speed and explosiveness to the ball added yet another dimension to an already balanced attack and relentless defense. On the subject of defense, 6th grade center back Talen Pilz, and classmate Naveen Owens, a transplant from striker to the outside back position for this occasion, played with skill and assuredness beyond their years. Ava Heung, at the other outside back, completed the back end of the Emerson Diamond Defense, which left keeper Ian Lewis with precious little in the way of work on the way to a clean sheet. Seventh grade outside mids Dominic Schuster and Lachlan Rae made many runs down the sidelines en route to effective crosses into the opposing penalty area. 8th graders Vince, Michael, and Lance repeatedly were too much to handle in the center of the field. 6th grade wing forward Fred DeBord came oh so close to finishing on three different balls to his post. In the end, Emerson put away 6 of the chances they created, for a resounding 6-0 final score, and the championship.

Emerson gave our son the confidence to find his own path, that he did not have to be a follower.

More than a third of the student body chooses to participate in Science Olympiad.
X