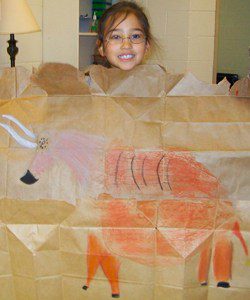 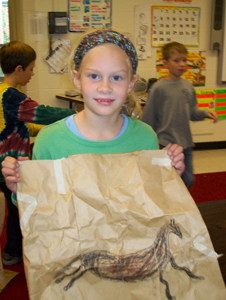 In 1940, four French boys and their dog were playing in the hills surrounding their town of Montignac, when they came upon a tree that had been uprooted by a recent storm.  Their dog, Robot, fell into a hole under this tree, and that is how one of the most important art discoveries of the 20th century began.

The wonderful story of the cave paintings of Lascaux, France, entranced the third graders at Emerson. What is so fun about teaching this unit is the students are learning a multitude of academic subjects in French class.  They studied the geography of France, the scientific reasons as to why the cave had to be closed to the public, and the history of the cave paintings that were found in this cave.  The students learned all of these new ideas in the target language of French, which is no easy task, as their primary language is English.

To complete this unit, students were encouraged to create their own cave of Lascaux.  Using brown paper grocery bags and some color pastels, the third graders created their own cave paintings similar to the ones found in Lascaux.  We created a cave in the classroom using tables, chairs, and their masterpieces.  They entered the “cave” with flashlights and gained a sense of what the discovery would been like for the four boys of Montignac 70 years ago.

When I first came here, I didn’t know anybody. But after that, I loved it here and I made so many friends. But some of the best friends I’ve made are my teachers. I have so many great memories with teachers I’ve had that I begin to smile.