On December 6, the Emerson Geography Bee was held in the library media center. Twenty kids in grades 4 through 8 participated through the seven preliminary rounds. Eight moved on to the finals. Finishing in a tie for sixth place were Arjun Purohit, Erik Johnson and Josh Moss – all elementary school students! Luca Bichakjian, another lower school student, took 5th. Sixth grader Henry Branch finished in 4th, and Ariel Mobius, another 6th grader, was 3rd. 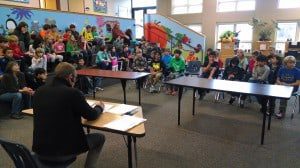 I don’t remember my first school because I was so BORED. But at Emerson, I remember each year clearly. One thing I will always remember is, in first grade, having a fourth grade buddy.